Joe Farkas came to Athens because his wife had to attend a business conference. He had some time to spend on his own so he contacted us to show him the feathered attractions of the area. Since this was a half-day tour, the itinerary included Oropos Lagoon and Schinias National Park.

We started at 07.00 and headed to Oropos Lagoon, the most important coastal wetland of Athens. Our target species included the Mediterranean and the Slender-billed Gull and the Kentish Plover.

We managed to have very good views of all the Gulls of the area: Mediterranean, Black-headed, Yellow-legged and Slender-billed.

But there were more new birds to Joe to see: Kingfishers, a Great Flamingo and at least two Red-throated Pipits, a regular but scarce passage migrant. We also managed to see Sardinian Warblers in the surrounding scrubs and a very close Mediterranean Shag as we started driving the coastal road, heading for Schinias National Park.

On our way to Schinias we stopped to look for Sombre Tits and Cirl Buntings. We got a very nice view of the bunting and a brief  view of the tit in flight.

Schinias National Park had another great surprise for both of us. While looking for waterfowl at the Olympic Rowing Center, a small group of three Bearded Reedlings came right in front of us! This is a very rare sighting in Athens, as the last confirmed record is from the 1990s.

Among the new birds for Joe - and there were a lot - the Ferruginous Duck, the Pygmy Cormorant (both seen at the rowing center) and the Cetti's Warbler were the most interesting.


By 14:00. we had alread seen and heard 56 species; it was time to head back to Athens. Joe had added a good number of lifers in just a few hours and wanted to tell all about his experience to his wife! Antoher great birding trip was over. 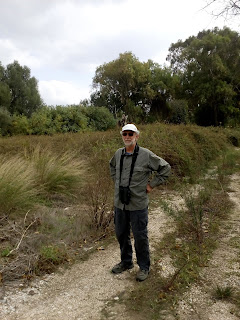