Rob Van Epps in an enthusiastic nature lover who as on vacation on the island of Santorini and was so determined to see some cool birds that he flew from Santorini on Saturday, Jun 6 to go birding with us.

Picking him from the airport early in the morning, we headed straight to the adjacent farmland, to look for the Black-headed Bunting and the Rufous Bush Robin. We found both of them and had some really nice photos.


There were also lots of Common Swifts, Crested Larks, Barn Swallows, as well as a Little Grebe and a Moorhen in a ditch close to the airport.

We then moved north, to the still-flooded Spata fields. The Ferruginous Ducks were one of the highlights along with the Black-winged Stilts, the Great Reed Warblers and the Zitting Cisticolas. A Short-toed Eagle flew overhead while, Alpine and Common Swifts were flying around all the time.

It was time for one of the Athenian specialties: the Ruppell's Warbler. We drove west and reached Mt Hymettus, where we managed to find one bright male at its usual post.  It was time for Mt Parnitha, Athens' highest mountain. The main target, the Sombre Tit, was found rather easily and along with that we saw Lesser Whitethroats (the sole breeding area in Athens), Red-backed Shrikes, Subalpine Warblers, Black Redstarts, Woodlarks, Nightingales, lots of finches and Cirl Buntings, among other species.


The last stop for the day was Vravrona wetland. There we found Green Sandpipers, most probably very early fall migrants, Little Egrets, a Peregrine Falcon with prey in its tallons (most probably a chick Black-winged Stilt from Spata Fields or Artemis Lagoon), dozens of swifts (including Pallid), Cetti's and Eastern Olivaceous Warbler and Goldfinches.

The day was over and the tally was 57 species. Rob was very happy to have seen many lifers in a single day!
TRIP CHECKLIST 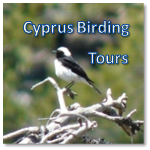