Dimitris is a Greek birder who currently lives in the US. He is new to birdwatching so almost every European bird is a lifer to him. When he planned to visit his homeland, he contacted us and arranged a weekend full of birds. The first day was dedicated to wetlands so we visited Messolonghi National Park, a unique lagoon complex 230 km west of Athens.

Our first stop, however, was the gorge of Kleisoura, north of Messolonghi, with the Griffon Vultures that still persist there. 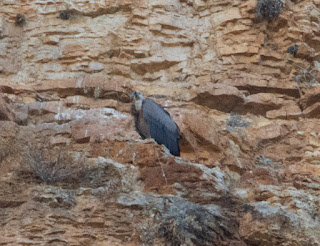 After Kleisoura, we visited one by one the lagoons of Messolonghi, having the opportunity to see hundreds of herons, flamingoes, pelicans, spoonbills, avocets, stone curlews, collared pratincoles, waders (including more than 100 Spotted Redshanks), Slender-billed Gulls and terns but also passerines like the Rufous-tailed Bush Robin, the Western Rock Nuthatch and the Spanish Sparrow.
A full 69 species were seen in one day of July!