Ricardo from Spain is our latest visitor who wanted to see some of Greece's specialties that cannot be found in the Iberian Peninsula. Due to the season, we focused on resident species like the Chukar, the Sombre Tit and the Western Rock Nuthatch, as well as the Yelkouan and Scopoli's Shearwaters. That's why Lake Dystos was chosen as it combines a ferry ride and ideal habitats for all the target birds of Ricardo.

We picked the first ferry to Evvoia and we had our first Scopoli's, along with Shags, hundreds of Yellow-legged Gulls and a migrant Ringed Plover(!).

Reaching Lake Dystos, we focused on the surrounding farmland and the adjacent mountains. Raptors seen include the Lesser Kestrel, the Levant Sparrowhawks and the Short-toed Eagle. Non-passerine migrants found include the Turtle Dove. the Hoopoe and the Bee-eater.

We also tried to find Rock Partridges but that is always a difficult task and we didn't get any.
Returning to the port of Nea Styra, an adult Audouin's Gull was a very pleasant surprise; the trip back to Athens yielded more Scopoli's Shearwaters.
The last stop was Mt Hymettus, where we succeeded in finding the Chukar; a whole family group was seen, in fact, from a close distance! 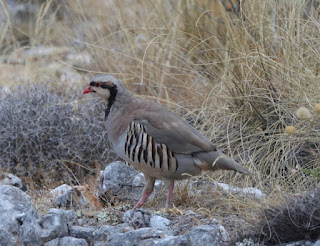