June in Athens can be quite hot some times and birding get tough. Brittany Foret, from the United States of America, was on her first trip to Greece, however, and wanted to see as many species as possible in half a day. As Greece Bird Tours gives much attention to the term 'tailor-made', we suggested to spend the whole time on Mt Parnitha, Athens' highest mountain and one of the most important birding hot spots.

Starting from downtown Athens at 06.45, it took us 45 min. to reach the lower slopes of the mountain. There, in a nice patch of mixed woodland, we got our first birds: Long-tailed, Great and Coal Tits and Cirl Buntings.

After a while, we headed for the higher altitude, where the bird diversity is even larger. Soon, we got great views of Sombre Tits, Sardinian and Subalpine Warblers, Black-eared Wheatears and Cretzschmar's Buntings, Athenian specialties that have colonized Mt Parnitha after the great wildfire of 2007.


The sky was teeming with swifts and a pair of Ravens mobbed a Common Buzzard. Then, a mega rarity (for the time of year) appeared: a Griffon Vulture! This impressive raptor is a rare, though regular, late fall migrant but this is the first time, in the last decades, to see a bird in summer as there is not any active colony around. Let's hope that this is the first sign of a future re-colonization.

Birding continued as we moved to more wooded areas and found lots of forest dwellers; Nightingales, Robins, Short-toed Treecreepers, Firecrests and dozens of Chaffinches were present.


Even though Brittany didn't want to leave the area, we had to drive back to Athens as she had booked a cooking class with her boyfriend later that day. Amazed by the natural beauty of Mt Parnitha and Greece in general, she made a promise to do a lot more birding the next time she comes to Greece, with us of course! 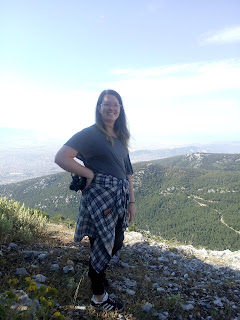